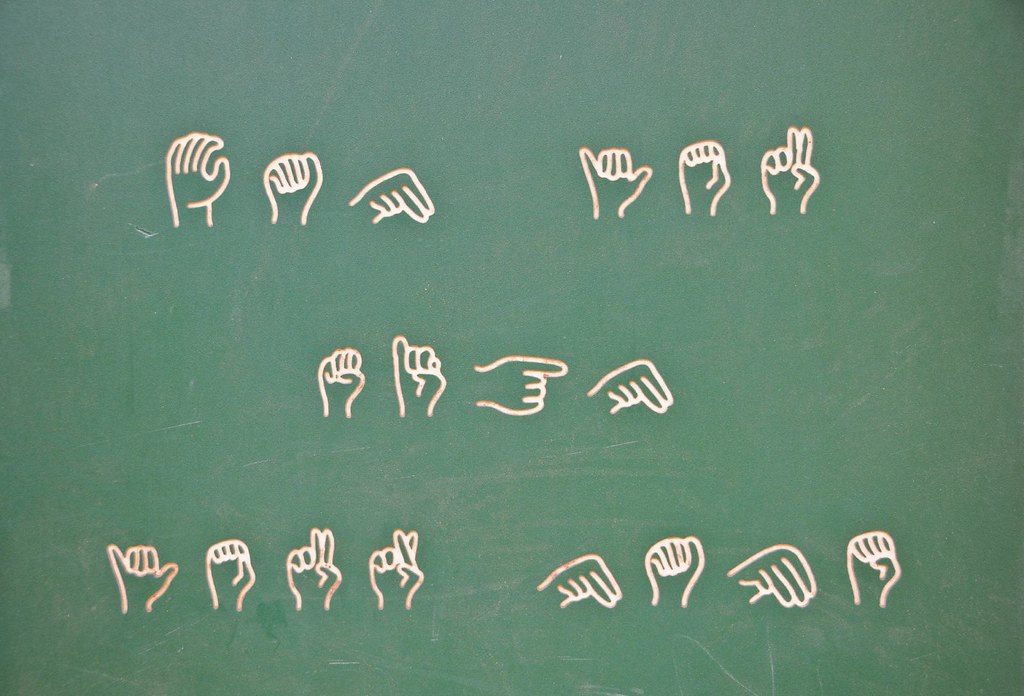 September was National Deaf Awareness Month. I tried to post this piece before the month ended, but alas! Better late than never. I’d like to discuss and dispel some of the many misconceptions around signed languages. Here are a few of the most common:

I’ll also spend some time discussing “baby sign language” (which is of personal import due to last year’s arrival of my very own teacup human).

Sign languages are natural languages whose modality is visual and kinesthetic instead of speech- and sound-based. They exhibit complexity parallel to that of spoken languages, with rich grammars and lexicons. Sign languages developed and are used among communities of deaf people, but can also be used by hearing individuals. These languages are not composed solely of hand movements. A good deal of their prosody, grammar (e.g. syntax, morphology), modification (adjectives and adverbials), and other features are expressed through head movements, facial expressions, and body postures.

American Sign Language (ASL) is the main language of Deaf communities in the U.S. and Canada. Contrary to what many assume, ASL is not grammatically related to English. From Wikipedia:

ASL emerged in the early 1800s at the American School for the Deaf in Connecticut, from a mix of Old French Sign Language, village sign languages, and home signs. ASL and French Sign Language (LSF – Langue des Signes Française) still have some overlap, but are not mutually intelligible.

One element of ASL that I find particularly neat is its reduplication (repetition of a morpheme or word to serve a particular grammatical function, like plurality)[1]. Reduplication is a common process in many languages, and it performs several important jobs in ASL. It does things like pluralize nouns, convey intensity, create nouns from verbs (e.g. the noun chair is a repeated, slightly altered version of the verb to sit), and represent verbal aspects such as duration (e.g. VERB + for a long time).

What is “baby sign language”? I haven’t found a very precise definition. The term seems to basically describe signing between (hearing) parents/caregivers and young children, but whether the signs come from a legitimate sign language like ASL, or are invented idiosyncratically by the family using them (and are maybe more iconic[2]), or some combination of the two, varies from source to source.

“The term is a bit misleading, since it doesn’t refer to a genuine language. A true language has syntax, a grammatical structure. It has native speakers who converse fluently with each other. By contrast, baby sign language […] usually refers to the act of communicating with babies using a modest number of symbolic gestures.”

When Dr. Dewar mentions symbolic gestures, she is describing things like pointing or other hand motions that accompany speech and make communication with preverbal infants a little easier. Most of the baby sign language resources I’ve come across endorse using ASL as a base, however, so it’s not just “symbolic gestures”. At the same time, the ASL signs are often simplified (both by baby sign teachers and the parents learning), and the fuller grammar is not usually taught to/learned by parents or their children.

In the following post, I’m going to delve further into baby sign language – its supposed benefits, tips, timelines, resources, and my personal experience so far. We’ll look at proponents’ claims versus the scientific research. (Spoiler: Your offspring won’t be the next Einstein just because you taught them how to sign ‘more’ and ‘milk’.)