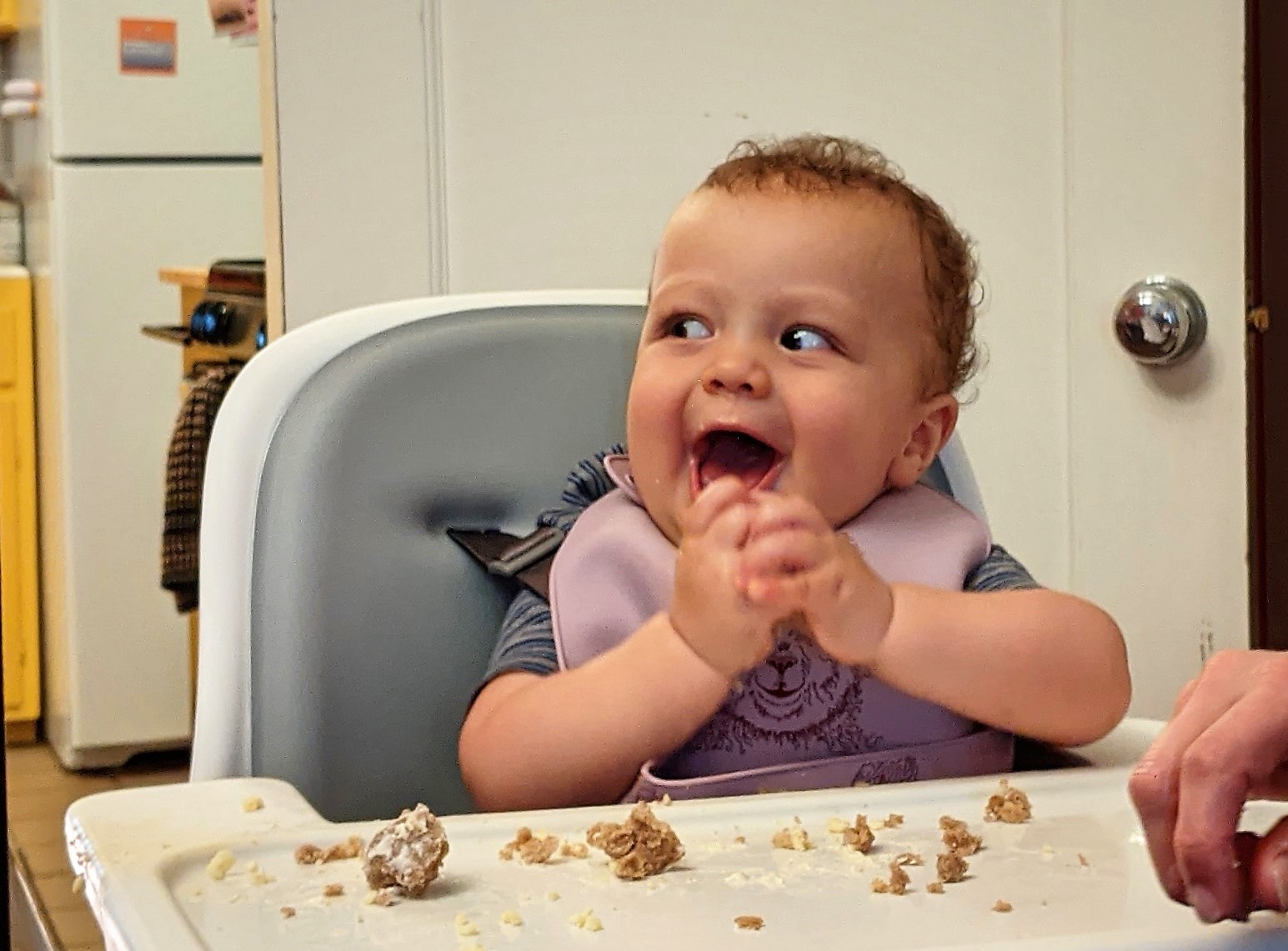 I made an attempt at defining this concept in the last post, which I’ll reproduce here: baby sign language is signing between (hearing) parents/caregivers and young children, where the signs are either from a real sign language like ASL, are idiosyncratic inventions of the family using them, or are some combination of both. Even if the signs come from a legitimate sign language, they’re often simplified, and the fuller grammar is not usually taught to/learned by parents or their children.

In this post, I’ll talk about baby sign timelines and tips, and then we’ll look at the supposed benefits versus the science.

Still, like with spoken language, an infant will grasp a sign’s meaning before they’re able (or willing) to produce the sign themselves.

I started signing for Ryden when he was about 5 months old. Signs I used daily were milk, drink, sleep, food/eat, more, read, book, mommy, water, change, diaper, and bath; and I included some of these into the two-word phrases drink milk, read book, more food, and change diaper. Signs I used a bit less frequently, but still repeatedly, were daddy, hungry, cereal, sing/song/music, outside, I love you, play, all done, and up.

Ryden always seemed to pay extra attention when I used a sign (he grew quiet and still, looked intently at my hands and face), and I could tell by way he responded at 10-11 months that he recognized all of them. But except for adopting the “more” sign around 11 months, he didn’t produce any others. By then he had begun voicing some semi-intelligible words anyway, so I kind of dropped off signing to him.[1]

Here are some common-sensical tips for signing with your baby:

Infants are little sponges. They start soaking up the language around them immediately – as soon as they’re born (and newer research points even earlier, to in-utero). At 6 months old, they comprehend considerably more than one might imagine. Language production, however, takes a while longer. The earliest that babies produce their first spoken words is 8-10 months. More often it’s closer to one year. (Ryden’s first word, cup [“kah!”], was around 11 months.) Proponents of baby sign language claim that babies can produce signs before speech. According to this claim, an infant’s hand/arm muscles develop before their articulatory system. Thus one of the main motivations for teaching a preverbal child some basic signs is to enable them to communicate sooner.

The babysignlanguage.com website groups the benefits of baby signing into three types, and most of the other material I’ve seen proposes benefits that fall into these categories.

If babies have the tools to communicate what they want, they will use those tools instead of crying and tantrum-ing. Parents will be able to understand when their child wants Cheerios, or has a poopy diaper, or is tired, and respond appropriately. There is less frustration all around.

Increased communication between parents and their preverbal children tightens the bonds between them. Parents report feeling closer to their babies, better able to anticipate and understand their needs. And their babies, secure in this close connection, are generally less fussy.

Advocates assert that signing with your baby improves their long-term cognitive development. Per babysignlanguage.com, this means a +12 IQ point advantage, a larger speaking vocabulary, earlier reading and higher reading comprehension, and better grades.

The practical and emotional benefits seem obvious. However, they both hinge on the assumption that infants really can and do learn to sign before they start communicating verbally – or even with gestures (like pointing[3]). It’s actually unclear whether this is true. I recommend reading this article on the subject, but here are the basic points:

As for the long-term cognitive benefits… again, the research is weak. The most frequently-cited work in this area is that by Linda P. Acredolo and Susan W. Goodwyn (1988, 1998, 2000)[4]. Their studies followed children from infancy to 36 months, and found that the ones who were taught to sign had slightly larger receptive vocabularies than babies in a control group – but only at a couple points in the middle of the study. By the end, differences between the two groups were not statistically significant.

On IQ, Dr. Gwen Dewar (author of the article referenced above) states: “the relevant research has yet to appear in any peer-reviewed journal. On this question, it’s safe to say that the jury is still out.”

Wikipedia also underlines the questionable nature of baby sign language benefit claims on the internet by detailing two studies conducted on sites making these claims. In the first study, over 90% of the information was opinion pieces or marketing products, with no research backing. The second study found only 10 articles out of 1747 (!) that presented research on the developmental effects of baby signing. And the consensus among those 10 articles was that baby signing doesn’t improve linguistic production or caregiver-child relationships. (That said, neither is there evidence that teaching babies to sign could be detrimental.)

My brief takeaway is – sign with your baby if it interests you and seems fun. I enjoyed learning a bit of ASL just for myself. But temper your expectations. Don’t expect your child to sign back quickly / much / at all before they start on verbal language (unless maybe you AND other caregivers sign to them constantly). And don’t expect that it will later transform them into a linguistic super-genius.

[1] All babies are different, but my main guess as to why he didn’t produce any other signs before starting speech is that he needed more input – more than the few words I regularly used, and from more people (his father, our nanny, etc.).

“When you say the word ‘milk’, babies hear the word […] That auditory stimulus travels from the ears to the language center of the brain to be stored as the word ‘milk’. However, […] when babies watch their parents sign milk and hear them say the word, […] [they] also have the wonderful opportunity to see what the word looks like. This additional visual information travels from the eyes back to the occipital cortex, which is commonly called the visual center of the brain. […] Your baby also knows what the word ‘milk’ feels like. When babies start signing back using their hands, that is what is called kinesthetic information. The motion of their hands and arms is being controlled by a third part of the brain called the motor cortex.”

[3] Do not underestimate the communicative powers of pointing! As soon as Ryden started pointing (between 11-12 months), it became much easier to intuit what he wanted or was interested in – because he simply pointed at it.