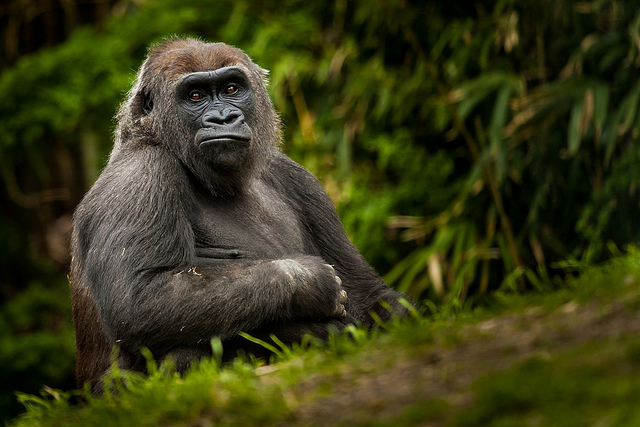 Can animals have language the way humans have language? From recent news headlines about a famous ape and her passing, one might conclude: yes. Titles such as “Koko: Gorilla who mastered sign language dies in California” and “Koko, the Gorilla Who Knew Sign Language, Dies at 46” imply that non-human primates, at least, can learn and use language as humans do. So once again I’d like to call the media out on their frustrating inaccuracy.[1]

From the BBC (first article linked above):

“Koko the gorilla, who is said to have been able to communicate by using more than 1,000 hand signs, has died in California at the age of 46. Instructors taught her a version of American Sign Language and say she used it to convey thoughts and feelings. […] The gorilla […] could understand 2,000 words of spoken English.”

From NBC (older article linked to second one above):

“In 2001, Williams visited the Gorilla Foundation in Northern California, where he met Koko, a gorilla who is fluent in American sign language”

By choosing words like master and know and fluent, journalists are misinforming readers (whether this is intentional or out of ignorance, I’m not sure). There are many differences between how Koko understood and used language and how humans understand and use it. Two obvious areas jump to mind: (1) vocabulary size; and (2) ease of learning. Regarding point one – adult native English speakers know between 270% – 500% more words than Koko[2]. A 2016 study found that 20-year-olds were able to identify an average of 42,000 lemmas (dictionary headwords, e.g. run for run, runs, ran, and running). The lowest 5% of the population in the study recognized 27,100 lemmas, and the highest 5% understood 51,700.[3] While I couldn’t find numbers for American Sign Language (ASL) speakers, I assume they would not be too far from the numbers for speakers of English. (Most ASL speakers are bilingual anyway, since they have learned English to read and interact with non-signers.)

As for point two, the ease of learning – Koko had to be explicitly instructed over many years. Human children acquire a relatively complete grammar within about 5-8 years of being born, and they do this even in the absence of active teaching.

More generally, major properties of human language which distinguish it from animal communication are:

Of course, animal communication has been shown to exhibit one or two of the above properties in specific contexts; you may have heard about such research on bird song, bee dances, and the communicative systems of elephants, bats, dolphins, squids, and apes. But at this point we don’t have evidence to suggest that any non-human form of communication displays all of these aspects simultaneously, or to the extent that human language does. That’s not to say that informational exchanges between other species aren’t complex. And this post is not meant to detract from Koko’s life or death. She and her trainers taught us invaluable things about the depth of gorilla intelligence and emotionality. Certainly, as we learn more about how various species communicate, we may need to update our definition of “language”. We’re just not there yet.