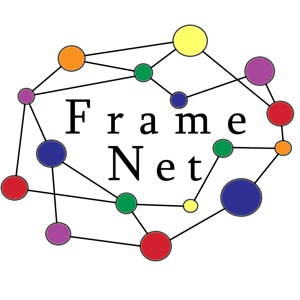 I’d like to discuss a theory in cognitive linguistics which is very near to my heart[1]: frame semantics. I’ll also present FrameNet, a database built using frame semantic theory, which has been and continues to be an excellent resource in the fields of natural language processing (NLP) and machine learning (ML).

Why is frame semantics cool? Why should you want to learn about it? Just this: the theory is an intuitive and comprehensive way to categorize the meaning of any scenario you could possibly dream up and express via language. Unlike many other semantic and syntactic theories, the core concepts are quickly understandable to the non-linguist. What’s more, frame semantics can apply to language meaning at many different levels (from the tiniest morpheme to entire swaths of discourse), and it works equally well for any particular language – be it English, Mandarin, Arabic, or Xhosa. I’ll try to demonstrate the theory’s accessibility and applicability with some details.

American linguist Charles Fillmore developed the frame semantics research program in the 1980s, using the central idea of a frame: a cognitive scene or situation which is based on a person’s prototypical understanding of real-world (social, cultural, biological) experiences. A frame is ‘evoked’ by language – this can be a single word (called a lexical unit), a clause, a sentence, or even longer discourse. Each frame contains various participants and props, called frame elements (FEs). If you’ve studied syntax/semantics (the generative grammar kind), FEs are somewhat analogous to traditional theta roles.

FrameNet is a corpus-based lexicographic and relational database (sort of a complex dictionary) of English frames, the lexical units evoking them, annotated sentences containing those lexical units, and a hierarchy of frame-to-frame relations. It was built and continues to grow at the International Computer Science Institute (ICSI), a nonprofit research center affiliated with UC Berkeley. FrameNets have also been developed in other languages, such as Spanish, Brazilian Portuguese, Japanese, Swedish, French, Chinese, Italian, and Hebrew.

Each frame entry includes a definition, example sentences, frame elements, lexical units, and annotation that illustrates the various fillers (words) of the FEs as well as their syntactic patterns. Let’s unpack all of this!

We’ll take a look at the Motion frame in FrameNet. Some screenshots of the frame entry follow.

The Motion frame is first defined. Its definition includes the frame elements that belong to the frame (the text with color highlighting):

“Some entity (Theme) starts out in one place (Source) and ends up in some other place (Goal), having covered some space between the two (Path). Alternatively, the Area or Direction in which the Theme moves or the Distance of the movement may be mentioned.”

After the definition come example sentences, featuring lexical units that evoke the frame (the black-backgrounded text) such as move, drift, float, roll, go.

Further down is the list of frame elements with their definitions and examples. 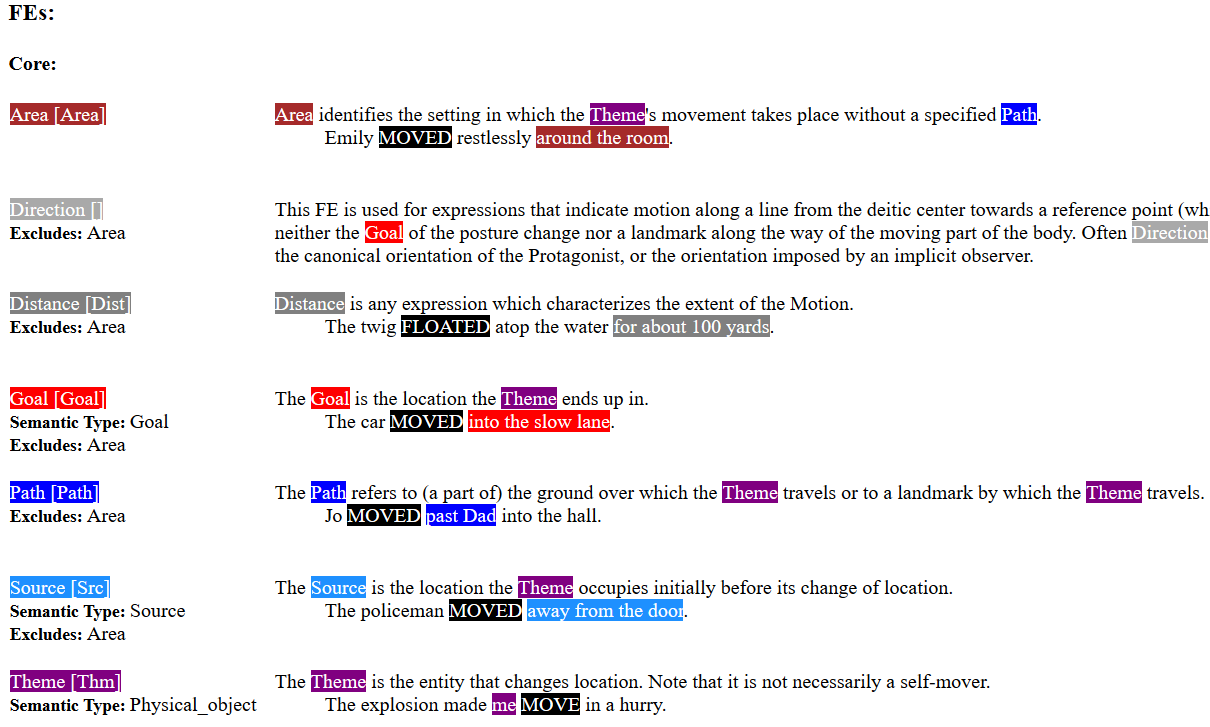 Here, the Theme FE is “the entity that changes location,” while the Goal FE is “the location the Theme ends up in.” In order for language to evoke this Motion frame, it must have some words or phrases which instantiate the Theme, the Goal, and the other FEs listed. In the examples above, me is a Theme in The explosion made [me] MOVE in a hurry; and into the slow lane is a Goal in The car MOVED [into the slow lane].

At the bottom of the entry is a list of lexical units that belong to or evoke the frame, as well as links to annotation of sentences from real data that contain those words.

Verbs like come, glide, roll, travel, and zigzag all evoke, quite sensibly, the Motion frame.

Once you click on the “Annotation” link for a particular lexical item, you’re taken to a page that looks like this:

Natural language sentences pulled from online corpora (texts from newspapers, magazines, books, tv transcripts, scholarly articles, etc.) are annotated for their Motion FEs. Annotation for the lexical item glide gives us an idea of the types of “entities” (the purple-backgrounded text, or Theme FEs) that “change location” (i.e. that glide) – boats, pink clouds, men, cars, planes, gondolas, and so on.

After this mini FrameNet dive, you may be wondering how the database is used in a concrete sense. To illustrate, let’s compare two sentences:

The entities differ (boat vs. dingy), the verbs differ (glide vs. drift) and the prepositions differ (into vs. [away] from). Yet at a higher level, both of these sentences describe a Theme which “changes location” – either moving towards a Goal in (1), or from a Source in (2). They both indicate motion. Because FrameNet helps machines “learn” that sentences with a variety of nouns, verbs, prepositions, and syntactic patterns can basically point to the same scenario, it’s a useful tool for many applications in the computational realm.

These days computers do all kinds of language-y things for us: answer questions, paraphrase texts, extract relevant information from text (and then maybe organize it thematically – for instance, around people, places, or events), and even generate new texts. These feats require that a computer parse natural language into accurate semantic chunks. FrameNet’s semantically- and syntactically-annotated data can be used as training input for machine models that “learn” how to analyze such meaning chunks, enabling our electronic devices to respond, paraphrase, or extract information appropriately.

To peruse a (very long) list of the projects which have used FrameNet data (organized by requester/researcher), check out the FrameNet Downloaders page.

So – on the off-chance that you find yourself stuck at home and bored out of your mind (?!?!)… you might perhaps enjoy a little investigation of frame-semantic characterization of scenes that involve applying heat, intoxication, or temporal collocation. 🙂

[1] Why am I so fond of frame semantics? A terrific professor of mine during grad school introduced the theory, and it resonated with me immediately. I used it in my master’s thesis, then presented the paper at the International Conference on Construction Grammar in 2014. Eventually, I had the privilege of working at FrameNet, where I came to know the brilliant lexicographers/semanticists/cognitive linguists who have dedicated decades of their lives to the theory and the project. Sadly, I never met the legendary Chuck Fillmore, as he passed away the year before I joined the FrameNet team.