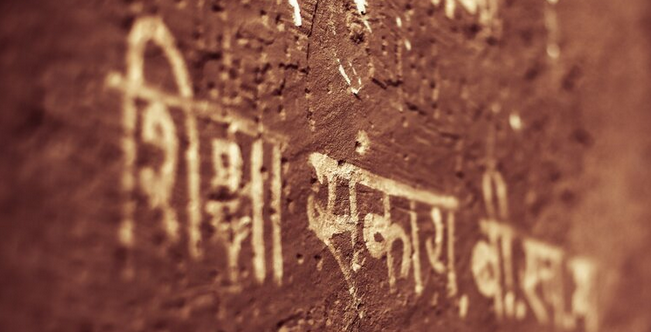 I was a yoga skeptic for years, until I got pregnant and tried a prenatal yoga class. The teacher was magnificent. I attended once a week throughout pregnancy, and although physically I grew heavier and heavier, each class left me feeling buoyant. After my son was born, I went back for “mama and baby” classes, which were dots of light during a very dark postpartum period. Since the pandemic began, I’ve been practicing regularly at home with YouTube videos, and it’s helped to keep me grounded during these weird and difficult times. Out of curiosity and as an ode to the practice, I wanted to learn a little about Sanskrit – the traditional language of yoga.

This post presents some of the knowledge bits I’ve accumulated, including: origins of the terms sanskrit and yoga, the language’s oral tradition and writing systems, a sociolinguistic observation, and a short list of Sanskrit-origin English words.

Sanskrit, the historical language of yoga, is a classical language of India (and South Asia more generally). It is an ancient tongue, still used liturgically in Hinduism, Buddhism, and Jainism, but no longer living because there are no first-language speakers. It is one of the twenty-two official languages of India.

How ancient is Sanskrit? It’s thought to be one of the first members of Indo-European (a large language family that includes European, Indo-Iranian, and Balto-Slavic branches). Sanskrit is divided into Vedic Sanskrit and Classical Sanskrit. The Vedic dialect came first, and was likely spoken by partially-nomadic Aryans around India long before it was written down. The Rigveda, a large collection of Vedic Hindu hymns, is the oldest known Sanskrit text, dating between 1500-1200 BCE. The emergence of Classical Sanskrit is attributed to Pāṇini, who created the Aṣṭādhyāyī (“Eight-Chapter Grammar”), as well as Patañjali with his Mahābhāṣya – these literary works went a long way toward formalizing the language, propelling it to a place of high learning and culture.

‘Sanskrit’ – The overall meaning is that of something “refined / perfected / well-formed / sacred”.

The verbal adjective sámskrta- breaks down into sám (“together / entirely / perfected”) and krta- (“made / formed / done”). So the term signifies a language “entirely done” – a perfect language.

‘Yoga’ – The Sanskrit noun yóga is derived from the root yui, meaning “to join/ yoke / bind together”; the Sanskrit root in turn derives from Proto-Indo-European *yéwg-o-s, from *yewg- (“to join”). So most frequently, the word is said to mean “yoke” or “union”. However, Pāṇini (mentioned above), stated that the term could also derive from yuj samādhau (“to concentrate”).

The older, broader sense pertains to Hindu or Buddhist disciplines that are aimed at guiding the consciousness (through physical, mental, and spiritual means) to a higher, more tranquil state, which is free from the chaos and suffering of mind and body.

The newer, narrower sense is the one most commonly used in the Western world – that of a system of physical postures and breathing techniques practiced to improve health. This “exercise” sense lacks the spirituality piece of the older meaning (see also hatha yoga).

As far as we know, Sanskrit was spoken (chanted orally), and not written, until at least 2000 BC. As such, it doesn’t have a known “native script”. After the Rigveda and other Vedas came into textual being, a variety of Brahmic (Indic) scripts were used. Over the last century, Sanskrit has mostly been written using the Devanāgarī script[1]. It has also been transliterated with the Latin alphabet, using the International Alphabet of Sanskrit Transliteration (IAST).

Here are several examples of different scripts that have been used to write Sanskrit (images from Wikipedia):

The prestige language: Sociolinguistic perceptions of Sanskrit vs. Prakrit

As I was reading about Sanskrit for this post, I noticed a theme emerging in descriptions of the language, especially as compared with concurrently-spoken related languages.

Sanskrit as a language competed with numerous, less exact vernacular Indian languages called Prakritic languages (prākṛta-). The term prakrta literally means “original, natural, normal, artless” […]. Patañjali acknowledged that Prakrit is the first language, one instinctively adopted by every child with all its imperfections and later leads to the problems of interpretation and misunderstanding. The purifying structure of the Sanskrit language removes these imperfections. The early Sanskrit grammarian Daṇḍin states, for example, that much in the Prakrit languages is etymologically rooted in Sanskrit, but involves “loss of sounds” and corruptions that result from a “disregard of the grammar“.

(“Vedic Sanskrit”) This early Sanskrit is rich in vocabulary, phonology, grammar, and syntax, which remains undiluted in its purity to this day. It consists of 52 letters in total, 16 vowels and 36 consonants. These 52 letters have never been tweaked or altered and are believed to have been constant since the beginning, thus making it the most perfect language for word formation and pronunciation.

I’ve bolded terms describing the Prakritic languages: less exact, normal, artless, all its imperfections, leads to the problems, loss of sounds, corruptions, disregard of the grammar.  These contrast with the terms (also in bold) used to describe Sanskrit: purifying, rich, undiluted, purity, the most perfect language. (Look at the very etymology of sanskrit, after all.)

I know almost nothing about dialects of Prakrit. These kinds of depictions set off alarm bells for trained linguists, though. Such portrayals almost certainly spring from socio-cultural/linguistic perceptions (usually related to the power and prestige of particular groups of speakers), and are not scientifically accurate descriptions of the languages in question. (See the “Descriptivism” paragraph here for a bit more context on the linguist perspective.)

Some modern yoga poses and breaths

Below are Sanskrit terms for some common modern-yoga poses and breaths. Those who practice will probably be familiar with the words, but maybe not the individual morphemes:

I’ll close out with a smattering of English words that can ultimately be traced back to Sanskrit[3]. If ever your conversation turns to the best methods for looting musky orange jungle candy, you’ll be prepared with a fun factoid about the etymology of those terms:

Check back soon for a second “language of yoga” post, which will approach the topic from a discourse analysis angle – focusing on repetition and variation in English-language yoga instruction.

[1] Devanāgarī is an abugida (alphasyllabary). It’s a very common writing system, used for over 120 languages, including Hindi.

[2] I couldn’t find definitive sources for this term – hence the alternative morphemic breakdowns.

[3] Derivations of these and many more on Wikipedia.