Literally cray: A linguist’s attitude toward speech errors and slang 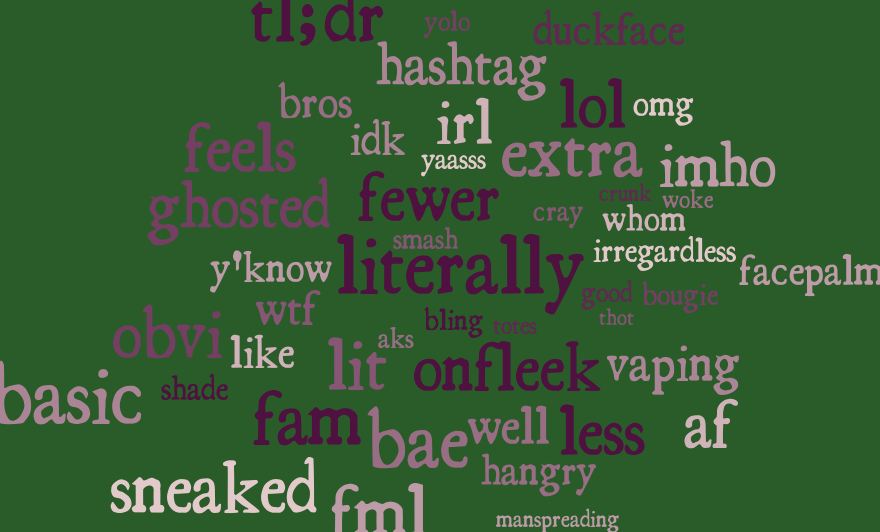 In a recent Lyft Line, it surfaced that the other rider in the car with me also had a linguistics background. Our driver was a non-native English speaker (from his accent maybe Russian) – although his English was pretty fluent. As he was deciding whether to make a left turn at a chaotic, construction-clogged intersection, he stuttered a bit and said, “well, it’s not not allowed”. Then, making the turn, he followed that with, “oh boy, and making these language mistakes with two linguists in the car…” The driver was assuming, as many do, that we would be more critical than the average person of said language “mistakes”.

First off, the driver’s statement wasn’t even a real speech error. Although slightly harder for us to process cognitively because of the two negatives, it’s not not allowed is in fact a perfectly grammatical sentence of English. A similar utterance might be said that avoids the duplicated not – it’s not illegal, for example. But what’s going on here is this:

Between each opening and closing bracket is a structural unit, called a constituent in syntax. (The sentence as a whole is also a constituent, but I didn’t want to blind you with brackets.) So, allowed by itself is a constituent (subscript 1). The inner not negates allowed; together they’re a constituent (subscript 2). The outer not negates not allowed, and becomes a larger unit of its own (subscript 3). In the end, this structure has a very nuanced meaning – more nuanced than just it’s not illegal – which is something like, “this action is not necessarily encouraged and may even be frowned upon, but it’s not against the law”.

Second, even if the driver had made a speech error, linguists as a group are much less inclined to judge than the average person. There is a prevalent misconception that linguists and English teachers are siblings in a “grammar nazi” family.  This is untrue. Indeed, just as biologists thrill in discovering some new mutation in a species, linguists are generally delighted by speech errors and seek them out as important material to study; they give vital insights into how human language and the human brain function.

It shouldn’t come as a surprise, then, that a couple of my colleagues and I have had fun collecting both native and non-native English speech errors we’ve encountered over the past year. Here is a sample:

Of major relevance to the speech attitudes topic are two concepts, flip sides of a coin: descriptivism and prescriptivism.

Descriptivism is a process which attempts to objectively describe actual language usage, as well as speakers’ basic and intuitive linguistic knowledge. From several centuries of descriptive investigation, researchers have concluded that all languages and dialects are complex and rule-governed. No clearly superior or inferior languages/dialects exist.[2] The judgements we, as members of a society have about a particular language or dialect are inextricably influenced by sociological factors.

Prescriptivism, on the other hand, is a process which attempts to prescribe, subjectively, what should happen in language. You are familiar with this from years of English/grammar classes and from style guides mandating rules for spoken and written language. What you may not know is that many of these rules are arbitrary, based on personal taste and accidents of history.

A few of the most common “rules” that persist today are actually confused English misappropriations of Latin by pompous old men playing king-of-the-intellectual-castle games. One example is preposition-stranding, which dictates: Do not separate a preposition from its noun, leaving it at the end of a clause. Say “To whom did you talk?” instead of “Who did you talk to?” Seventeenth century poet John Dryden made this up (misapplying Latin, where preposition-like pieces attach to nouns and truly cannot separate from them) in order to disparage the work of Ben Johnson. Other examples include the predicative nominative, split infinitives, and the count–mass noun distinction (less vs. fewer).

English teachers are not alone in their prescriptivist tendencies. People generally are rather opinionated about language. Certain “errors” even become so despised as to prompt real-world action. Take the word literally. A New York City bar now has signage banning its use and warns that offending customers will be kicked out. Countless online articles and forums bemoan the word’s ubiquity with the rationale that speakers are using it to mean its opposite (figuratively). A bit of history and context, however, lend perspective.

Literally has been used as figuratively, or more precisely, as an intensifier, for over 300 years. Such literary greats as Charles Dickens, Mark Twain, and James Joyce (among others) have used it in this emphatic way. And the adverb’s paradoxical plight is similarly shared by a whole cast of terms, known as auto-antonyms. Interestingly, none of the other English auto-antonyms get the attention that is lavished on “literally”.

Now that I’ve outlined descriptivism and prescriptivism, I would like to add two final clarifications. First, being a descriptivist does not mean throwing out the idea of spelling conventions, or tossing aside standard education. Linguists of course recognize the utility of teaching standardized writing and speaking for particular contexts (school, job, etc.) for purposes of clarity, versatility, and social mobility. Language is rich and its uses are necessarily multifaceted.

All of the above also does NOT mean specific words or expressions or ways of speaking never make linguists cringe. We’re human after all. Despite knowing the full historical and linguistic context of “literally”, I still grind my teeth hearing it many times in succession. I have other personal struggles with clippings (cray, totes, obvi) as well as with internet chat-cum-speech acronyms and initialisms (lol, idk, wtf, omg). Simultaneously, I view them as fascinating lexical change phenomena. And I never take my individual tastes to mean that the language is somehow “degrading”. Languages don’t degrade; they change, and have been changing ever since our ancestors began to talk. If not for such constant metamorphosis, we wouldn’t have the enormous linguistic diversity – the thousands of languages and dialects – that exists today.

[1] Where sounds, syllables, or words are switched.

[2] It has been an oft-repeated creed in linguistics over the last few decades to make the stronger claim that “all languages are equal”. However, the statement has not been scientifically proven, as researchers have not yet determined the precise criteria by which languages are to be measured, much less figured out how to measure and compare such enormous complexity. This thought-provoking topic will be the subject of at least one future post.