On machine translation, the media, and meaning (a response) 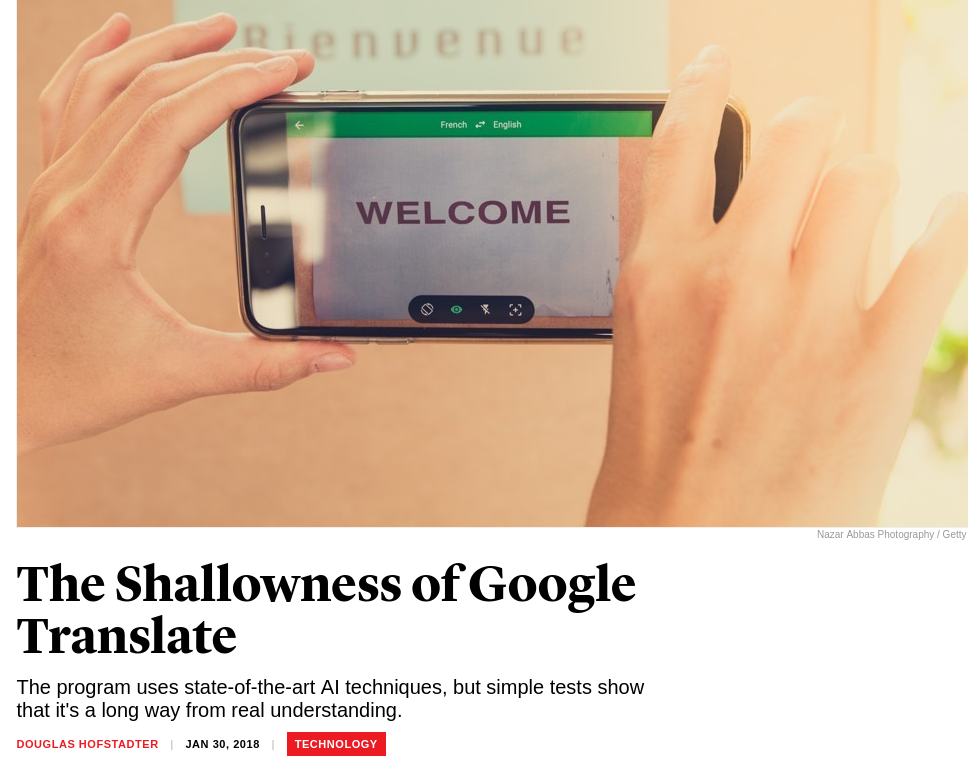 I’m a Douglas Hofstadter fan. I read his book I Am a Strange Loop years ago, and it remains one of my three favorite non-fiction books, period. I highly recommend it to anyone who is at all interested in the nature of consciousness. The cognitive scientist’s Pulitzer Prize-winning Gödel, Escher, Bach: An Eternal Golden Braid has also been on my to-read list for a long time. So I was excited to see this article by him in The Atlantic, on another area that interests me: machine translation and machine “intelligence”.

Early on in the piece, Hofstadter says he has a “longstanding belief that it’s important to combat exaggerated claims about artificial intelligence”. Having worked in the machine learning/AI field for a little under a year now (but what an intense year it has been!), and having read countless popular media articles touting the astonishing advances in natural language processing/understanding, ML, and AI, I heartily agree with his sentiment. Such reporting is as misleading as it is annoying.

I came across a statement of this type the other day, in Stanford AI researchers make ‘socially inclusive’ NLP:

I have trouble believing that any researcher working in NLP/NLU/ML/AI thinks anything is a solved problem. Despite much progress, the field is still in its infancy. Doesn’t anyone remember Einstein’s quote (adapted from a similar idea expressed by Socrates) – “The more I learn, the more I realize how much I don’t know”? Where I work, every possible solution to a given problem brings up more questions, and even the “simplest” “facts” cannot always be taken for granted. (Remember when you were taught parts of speech like verb, noun, and preposition in grade school? Working at the level of detail we do, even these fundamental rules are often inadequate, requiring further specification. Turns out it’s hard to throw messy, real language into clean, fixed bins.) So I think the media does the field, its researchers, and the reading public a great disservice by sensationalizing and oversimplifying the challenges.

Hofstadter’s argument about understanding is even more poignant:

“The practical utility of Google Translate and similar technologies is undeniable, and probably it’s a good thing overall, but there is still something deeply lacking in the approach, which is conveyed by a single word: understanding. Machine translation has never focused on understanding language. Instead, the field has always tried to ‘decode’— to get away without worrying about what understanding and meaning are.”

We call the study of meaning and understanding semantics and pragmatics. People’s real world knowledge plays a key role here as well. To my mind, meaning (only complete when tied to real world knowledge) is the last frontier for AI and language. Today’s mobile/home voice assistants have definitely not yet mastered meaning. Technologies have made serious headway in resolving structural patterns (syntax), proper nouns (Named Entity Recognition) and some other aspects of language. But meaning, that great magical beast, eludes its pursuers. It is really, really challenging to computationally model the depth and complexity of human understanding. Because, although language itself is quite complicated, it’s still an impoverished medium for conveying the millions of subtle things we want and are able to convey – it relies heavily on context, implicature, presupposition, entailment, prosody, speaker-listener relationship, etc. I agree again with the author when he says that human-like machines are “not around the corner.”

I do think that Hofstadter seems to be simultaneously recognizing how hard the task of modeling meaning is, while not giving enough credit for things accomplished. Google Translate is way better now than it was at its inception over ten years ago. I also think he glosses over the tool’s main usage – which is more functional than artistic or poetic. Am I wrong to assume people use Translate much more for a quick word or phrase, when traveling or speaking on the fly, than for translating longer passages of literature? If they’re doing the latter… per the author’s experimental results, they clearly shouldn’t be.

What do you think – about media reportage of technology, machine “intelligence”, Hofstadter’s article? Feel free to comment!