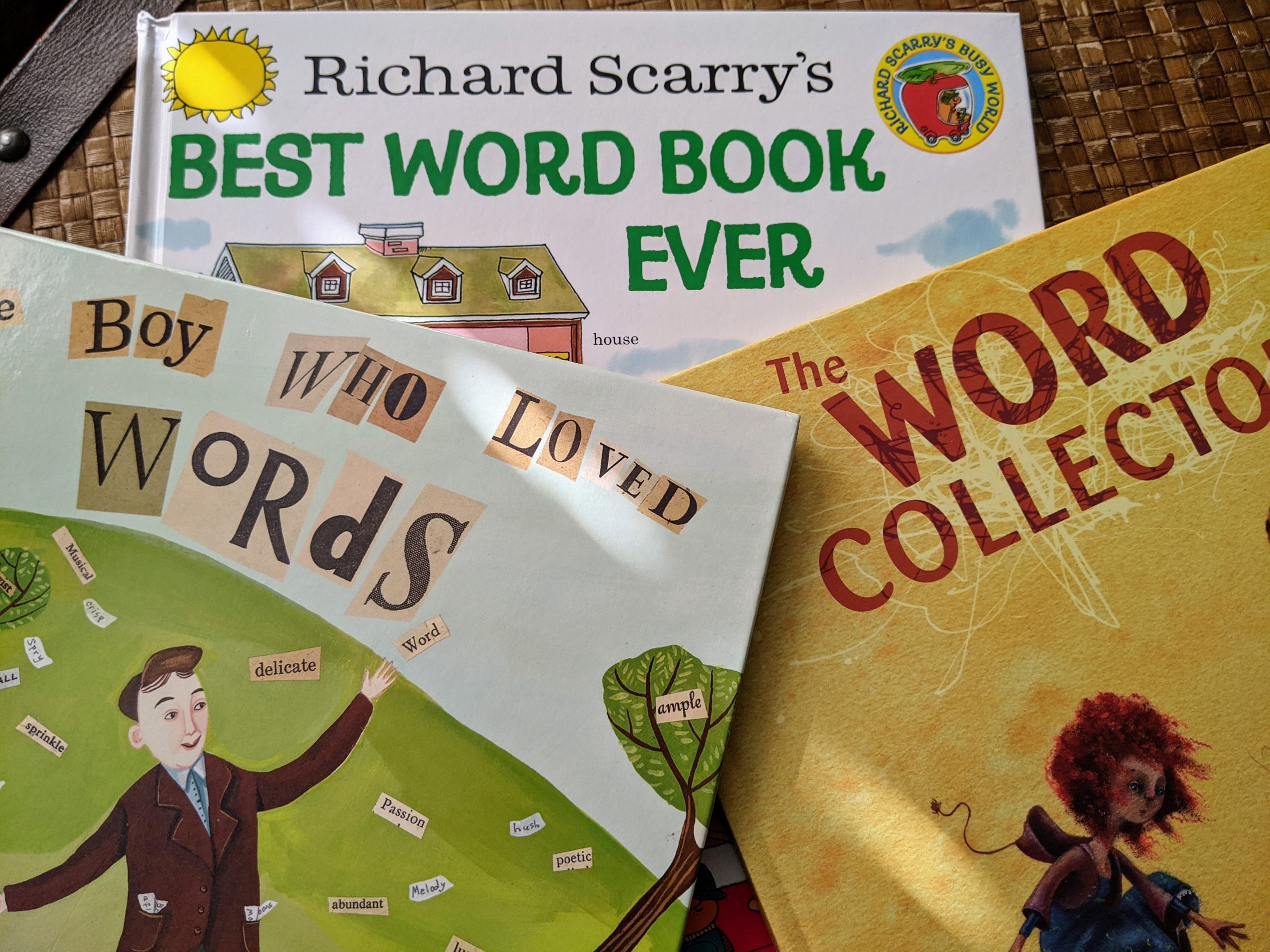 Perusal through the material on this blog will quickly show that my interests trend towards words and language acquisition. This post combines the two topics: the first section has some interesting morsels on word learning from a book (that I’m reading) by Yale psychologist Paul Bloom, called How children learn the meanings of words; the second is a collection of my now 22-month-old son Ryden’s first 100(-ish) words. The collection is categorized two ways – chronologically, and syntactically/semantically (I just couldn’t resist).

From How children learn the meanings of words

What is a word, and what is it to know a word’s meaning?

Bloom adopts the Saussurean sign notion of a word – “an arbitrary entity that has on one side a concept and on another, a form.” (p. 16)

“Under this view, two things are involved in knowing the meaning of a word – having the [mental representation or] concept and mapping the concept onto the right form.” (p. 17)

About how many words does the average English speaker know?

Bloom states that people vastly underestimate how many words they and others know. In reality, it is estimated that American high school graduates know about 45,000 words, and this

“is inevitably a low estimate, as it excludes proper names for people and places, idiomatic expressions, an undecomposible compounds. Taking these into account, the estimate jumps to 60,000 or 80,000, and people who do a lot of reading might know twice this many” (p. 6)

“[…] Katherine Nelson’s landmark study of 18 children’s first 50 words (Nelson, 1973). As she points out, one sign that children know what words are is pointing at things and asking about their names. Two-year-olds can ask ‘What’s that?,’ but younger children can ask the same question by pointing and saying something like ‘Wha?,’ ‘Tha’, ‘or ‘Eh?’ Interestingly, this sometimes occurs early in lexical development. Most of the children Nelson studied had a deictic pronoun that was used in just this way by the time they learned 50 words – and six of the children had one such pronoun among their first 10 words.” (p. 38-9)

To share a personal anecdote supporting the above: the baby with whom my son shared a nanny, Hawk, started saying ‘dat’ (‘that’) and ‘dat’un’ (‘that one’), often accompanied by pointing, before he was saying much else word-wise. My son quickly adopted it as well. And around 17 months, Ryden began saying ‘dish’ (‘this’) whenever he wanted something in his view (which was constantly).

Rate and variation of word learning

“By the age of 17 months, children are learning words at the rate of about five per week. This rate speeds up in the months and years that follow.” (p. 43)

Assuming 60,000 as a “good conservative” average for the number of words an adult knows,

Think about this range. One two-year-old speaks only seven words, while another produces 668! This variety should be reassuring to any parents anxiously following their toddler’s language development.

Then let’s go beyond numbers for a minute:

“Another type of variation is in the ‘style’ of vocabulary development. As Nelson (1973) discovered, only some children adopt a referential style – the textbook pattern of development in which children first learn single words, typically a lot of nouns, and later combine them in phrases and sentences. Other children are more expressive; they tend to be less caught up in naming and more into using memorized routines, often strings of words, for social or instrumental purposes, such as thank you, go away, I want it, don’t do it, and the ubiquitous no.” (p.50)

Note: For simplicity, I’m listing the words here using standard English spelling, ignoring the way Ryden actually pronounces them (although that’s documented too). Even when a word is phonetically rather far from its standard (/adult) pronunciation – for example, he says “ko” for “cookie” – I’ve included it in this list if his intended meaning is clear from context. (This is generally how first words are counted in the relevant research, and it makes sense. See previous post, where I mention how babies’ first attempts at word production are necessarily approximations.) 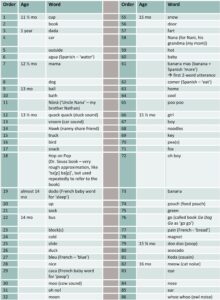 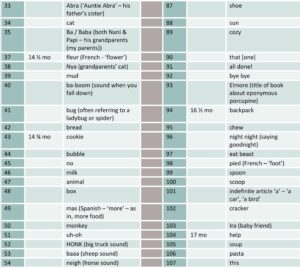 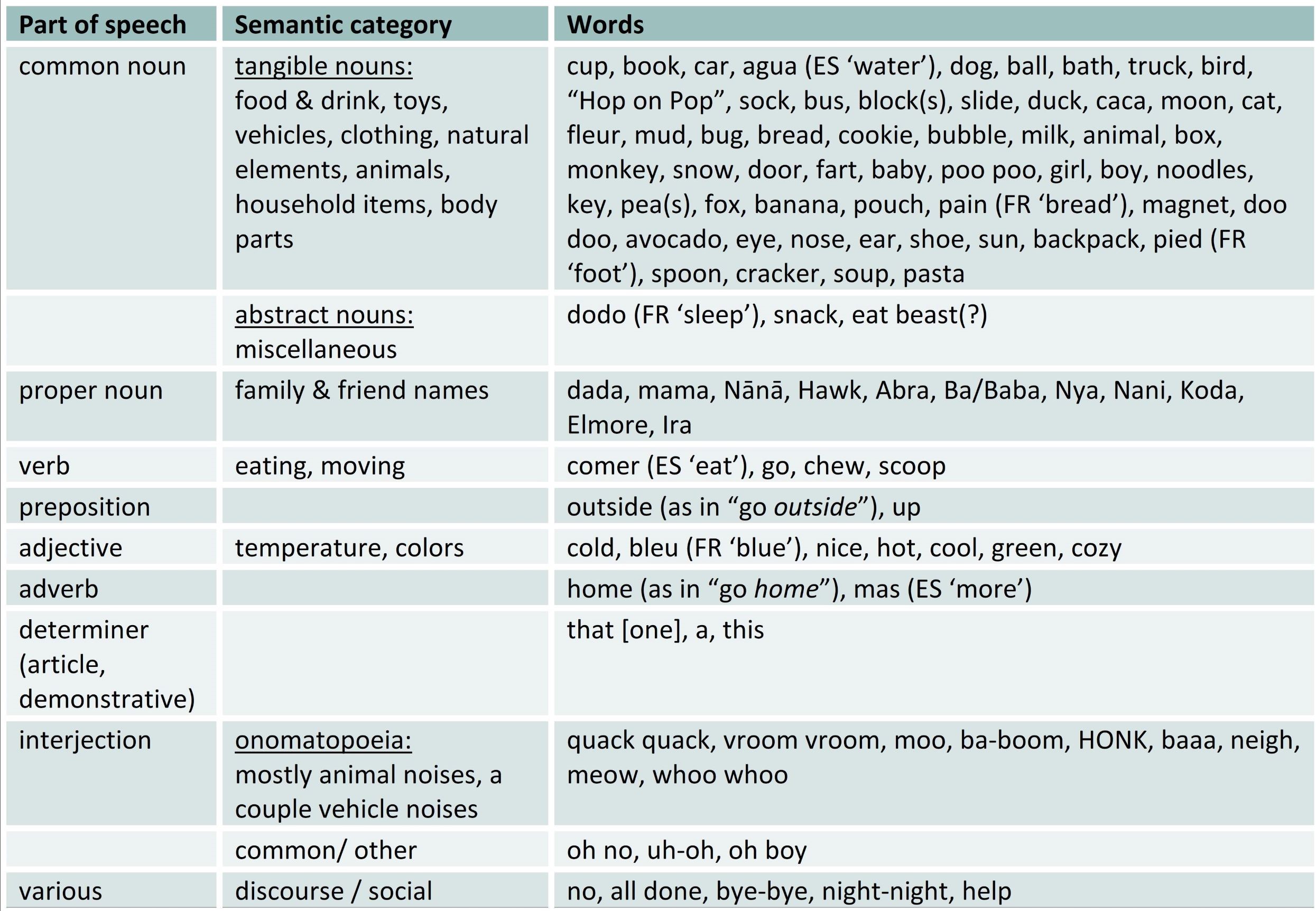 After organizing these lists, I started on chapter 4 in How children learn the meanings of words, and was pleased (if not surprised) to see how Ryden’s utterances fit wonderfully within a larger generalization:

“Many early words refer to middle-sized objects – things that can move and be moved. These include names for specific people (Mama, Dada), animals (dog, cat), toys (ball, block), articles of clothing (sock, shirt), and other artifacts (fork, chair). There are names for substances (juice, milk), names for parts, typically body parts (nose, foot), modifiers (hot, more), words that refer to actions or changes (up, allgone), and routines that are linked to certain social interactions (bye-bye, peek-a-boo) […] Soon afterward, verbs appear (go, make), as do prepositions (in, on) and more abstract terms (kitchen, nap).” (p. 90)

To see short video clips of a few of Ryden’s first words, check out this little album!